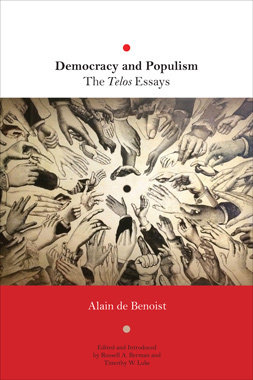 Democracy and Populism: The Telos Essays

Edited and Introduced by Russell A. Berman and Timothy W. Luke

Purchase from the Telos website, also available in ebook format from Amazon.com.

« Europe has been on a long vacation from politics—for understandable reasons—but the price has been a failure to understand the most basic human questions, or even to ask them. Alain de Benoist reminds us that this vacation will have to end. »
—Peter Thiel, entrepreneur, investor, and author of Zero to One: Notes on Startups, or How to Build the Future

The crisis of democracy, the consequences of neoliberalism and globalization, the limits of sovereignty, and of course the rise of populism: few thinkers have given more sustained attention to these matters than the French author Alain de Benoist. Democracy and Populismcollects de Benoist’s essays from the journal Telos, where many of his writings first appeared in English translation. Reading de Benoist in Telos provides access to a distinctive transatlantic intellectual dialogue and to an array of prescient insights into the current political condition on both continents. De Benoist clearly anticipated today’s political condition: the critique of neoliberalism, the contradictions in liberalism created by the postcolonial frictions of identity politics, and the implications of a resurgent populism. The specific forms of populist movements are sure to vary in the coming years, but the crisis of liberal democracy will remain the defining feature of political life for the foreseeable future. De Benoist explains why.

Contents
Introduction by Russell A. Berman and Timothy W. Luke
Democracy Revisited
The Idea of Empire
“We can only reach universality through particulars”: The Question of the Right: The 1993 Interview
Confronting Globalization
Nazism and Communism: Evil Twins?
What Is Sovereignty?
The First Federalist: Johannes Althusius
On Politics
On the French Right—New and Old: An Interview with Alain de Benoist
On Identity
On the French Referendum
Our American Friend Paul Piccone Was a Free Spirit and a Loud Talker
The Current Crisis of Democracy
Dismantling the Left–Right Divide
What Is Populism?